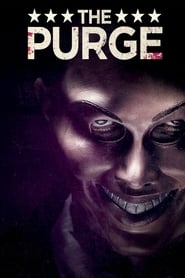 If marketed correctly, a horror movie/franchise can be an absolute gold mine. In fact, writer/director James DeMonaco's latest widespread horror phenomenon, The Purge, had already received the green light for a sequel, even though the first installment hadn't officially opened yet. It's absolutely crazy when you think about it, but that's the world we live in now. All it takes is a clever premise and a hypnotic two and a half minute trailer to fool a nation of paying customers. And please take my word for it, The Purge is just another shining example of how misleading a theatrical trailer can be.

Set in the near future of 2022, the United States is a new nation. After unemployment, crime and poverty become too big of an issue for our country to handle, we adopt a new plan known as "The Purge". The Purge is one 12 hour period during the calendar year in which all crime (even murder) is legal. There's no police, there's no ambulances or hospitals, just good old-fashion human survival. Surprisingly, this newly adopted idea helps restore the United States back into a crime and poverty-free nation. But after a suburban family known as the Sandins decide to harbor the target of a group's annual Purge, they must find a way to survive the evening.

Sadly, The Purge represents a completely mishandled and poorly utilized idea. On the surface, it's nothing short of a genius premise. Easy to grasp, highly original and essentially limitless. The Purge should stand as a horror genre's dream come true. However, James DeMonaco's script and direction are entirely off the mark. No one can deny DeMonaco's brilliant idea for a story or his politically charged subplots that truly add depth to such a well-conceived notion. But instead, he receives a lion's share of criticism for his complete mishandling of a remarkably original premise. First, The Purge takes far too much time to get into the swing of things. And once the ball finally gets rolling, DeMonaco maneuvers the film in a poor direction. Where it hints at social class warfare and natural selection, The Purge hits all of the wrong notes in the process. The feature takes these deep rooted psychological ideas that branch off of its premise so easily, and turns them into a laughing stock of a finale. Hence, The Purge stands as nothing more than a huge disappointment.

In addition to the film's botched storyline, another irritating facet of The Purge is the irrationality of its characters. Surely we've all seen characters make poor decisions in horror movies. "Don't go up those steps" or "why are you moving towards the noise" have crossed our minds time and time again. Yet, The Purge places its entire focus on a mother and father desperate to protect their family. Can someone explain to me how this family shows absolutely no interest in finding one another once the power goes out in their home and they've been separated? And after the father fights off an ax-wielding woman and her male companion, his son asks about the matriarch (who is wandering the house all alone) and the dad simply responds that he's sure she's all right. There are contradictions galore and a substantial amount of nonsensical behaviors exhibited by the characters. At the end of the day, The Purge can be tallied up as yet another Hollywood blunder.

Admittedly, I counted the days until the release of James DeMonaco's The Purge. Yet, an enticing trailer and a strong general idea are squandered by poor writing and a lack of attention to detail. While production company insiders are aware that they have a box office smash on their hands, we can only hope that a stronger script will make the sequel a much more desirable final product than this first installment. The scares are too sporadic and the tension is short lived. Virtually, there's no good enough reason to waste your money on The Purge. Please avoid.