Review | The Theory of Everything
Search 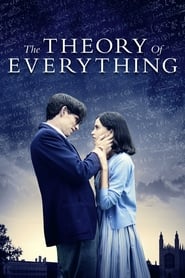 The Theory of Everything
Movie Critic Dave's Ratings
Stars

Academy Award winning filmmaker James Marsh, best known for his popular documentaries Man on Wire and Project Nim, debuted his new biopic, The Theory of Everything, at the Toronto International Film Festival in early-September. The result was a shake-up in nearly all of the major Oscar races thanks to beloved performances from a pair of young up-and-comers, Les Miserables' Eddie Redmayne and the adorable Felicity Jones. And although I wasn't nearly as enamored with the overall final product as those in Toronto, the fact remains that The Theory of Everything has the staying power of a late-year Best Picture contender.

As a remarkably gifted doctoral student at the University of Cambridge in 1963, a young aspiring physicist named Stephen Hawking (played by Redmayne) discovers that he's suffering from a motor neuron disease (ALS) and is given only two years to live. Deeply depressed and feeling utterly hopeless, only the loyalty and devotion of a recent love interest named Jane Wilde (Jones) can keep Stephen motivated enough to continue his scientific pursuit of understanding the origins of the universe. Yet, many years after the two young lovers marry, Stephen's deteriorating physical abilities and Jane's tireless efforts at caring for their family prove to be the ultimate match for the couple.

Building a flourishing career upon the foundation of documentary filmmaking, it appears that very little changes with James Marsh's approach in The Theory of Everything. The director takes the audience through a realistically shaped journey with both of its lead characters who are brilliantly portrayed by superstars in the making, Eddie Redmayne and Felcity Jones. Redmayne, who was highlighted in my Top Rising Stars write-up back in May, accepts the daunting task of transforming the virtually paralyzed genius, Stephen Hawking, to the big screen, and he does so with remarkable ease. But don't be fooled, The Theory of Everything isn't just Stephen's story. The film also forces the viewer to relive the physicist's escalating physical limitations through the eyes of his wife, Jane. Hence, Felicity Jones' powerful turn as the rock of the Hawking household and a woman who valiantly stares down any obstacle even tends overshadow Redmayne's work by the closing credits. Make no mistake about it, though, both performances are equally deserving of all their praises.

While top notch portrayals clearly highlight this biopic, where the movie fails is in its pacing and lack of depth to Hawking's ideas and achievements in the science community. Rather than exploring the brain inside of this living genius who has soared past unspeakable odds, The Theory of Everything takes the safe systematic approach by following the presumed biopic template. Thankfully, Marsh receives exemplary performances that almost single-handedly support his relationship-driven narrative. While it's true that very few couples can admit to facing life-altering hardships comparable to those that Stephen and Jane had to endure, the couple's complicated marriage and unfathomable circumstances are vastly outstretched and inundated with glossed-over milestones. A more earnest approach would have been to examine the daily grind associated with a loved one suffering from ALS. Instead, The Theory of Everything stumbles along from checkpoint to checkpoint giving it a somewhat artificial feel.

The talent surrounding James Marsh's The Theory of Everything is magnificent, and the film is almost certainly going to stand out as the feature that elevated both Redmayne and Jones' careers to new heights. However, the true mark of a great film is to counterbalance transcending performances with an equally effective story, which doesn't happen here. For people with any knowledge of Hawking's personal life, The Theory of Everything will open very few doors into the unknown of the man at its center. And for someone as groundbreaking and exceptional as Stephen Hawking, that just doesn't feel acceptable.