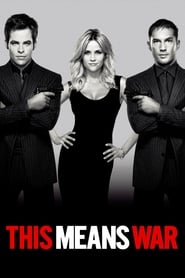 For couples, Valentine's Day offers a chance to relive the romantic foundation of a strong relationship. For Hollywood, February 14th means that a slew of hard to swallow romantic comedies will overtake movie screens all across the country. 2012's most notable rom-com to cash in on the Hallmark holiday is McG's This Means War. With a trailer and premise nothing short of vomit inducing, only cast mates Reese Witherspoon, Chris Pine, and rising star Tom Hardy could rescue this film from the Valentine's Day abyss.

This Means War follows a pair of CIA operatives named FDR (played by Pine) and Tuck (played by Hardy) whose relationship transcends co-workers and enters the realm of brother-like territory. But when the divorcee Tuck and the womanizer FDR both fall head over heels for Lauren (played by Witherspoon), the two men would rather dish out bullets than take one for each other. As the two men go to great lengths to sabotage one another's chances with Lauren, she struggles to decide over which guy is the right one for her.

With any movie, expectations play a large role in an individual's final judgment of a film. To be brutally honest, I expected very little (emphasis on very) from McG's latest work, This Means War. And to the film's credit, it surpassed my minuscule anticipation. The feature boasts a three-headed monster of lead characters, centered mostly around Reese Witherspoon as the trophy to be won. Although Witherspoon is delightful at times, Chris Pine and Tom Hardy are the true backbone of the film. Their on-screen male competitiveness is highlighted by their character's desire for grandeur. This Means War offers a sprinkle of laugh out loud moments throughout Hardy and Pine's little game of "anything you can do, I can do better". Another surprising focal point of the film resides in the minor character Trish (played by Chelsea Handler). Handler serves as an over-the-top, charismatic spokesperson for all single women trying to find the right guy. Her smattering of comedic one-liners undeniably keep the film afloat. Kudos must be given to director McG for selecting a versatile collection of actors and actresses.

Despite the movie's occasional laughs and its solid cast, This Means War is far from perfection. First and foremost is the weak and artificial CIA back story used in the film. It's creation only offers an almost pointless subplot and numerous out of place action sequences. Furthermore, McG's latest work delivers an obvious resolution that can be seen almost as soon as the opening credits role. With a poor script and a paper-thin foundation, ultimately, This Means War can only go as far as its cast can take it.

This Means War is an entertaining and sporadically comical film. It's easy to sit through and never too pseudo dramatic, however, as a whole, the movie is far too run of the mill to recommend.