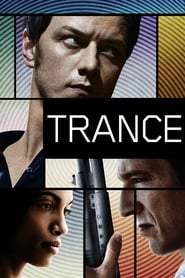 After having his 2010 critically praised film 127 Hours nominated for Best Picture by the Academy, director Danny Boyle took some time off from filmmaking. Instead of immediately jumping into a new and challenging project like he always does, the England native decided to take some time away from the director's chair and put together the 2012 Olympic Opening Ceremony in London. Accepting such a feat only adds to the versatile resume that Boyle's built in over two decades in the entertainment industry. With a filmography boasting a broad spectrum of genres (i.e. Trainspotting, 28 Days Later and Best Picture Winner Slumdog Millionaire), there's no label big enough for such a multi-talented director like Danny Boyle.

Boyle's latest endeavor comes in the form of the drama-thriller Trance. James McAvoy stars as Simon, an art auctioneer who becomes mixed up with a band of criminals by promising to help them steal a valuable painting. After the whole ordeal fails to go according to plan, a blow to the head causes Simon to forget where he left the piece of art. Therefore, the criminal leader Franck (played by Vincent Cassel) forces Simon to visit a hyno-therapist (played by Rosario Dawson) with hopes that hypnosis can help relocate the priceless painting.

Trance is a mind-bending affair that spends a majority of its running time carefully toeing the line between dream-like state and reality. Never knowing who to trust and who to root for, Danny Boyle's newest release demands that the audience think less and experience more. Under the circumstances, Trance becomes yet another insanely visual and audibly pleasing joy ride that only Boyle himself could conjure up. The director accomplishes a completely original and unique style that's worthy of recognition all on its own. Furthermore, cast members McAvoy, Cassel and especially Rosario Dawson (who fearlessly shows it all and then some with a few graphic nude scenes) offer the level of performances necessary to hoist Trance beyond other style-first films like this year's Spring Breakers. When you couple Boyle's singular sense of flair with such a brutally convincing and outstanding collection of actors and actresses, Trance clearly separates itself as one of 2013's finest achievements to date.

For all of Trance's stylistic successes, Boyle's "think less" approach does, however, induce some major plot holes and unforgivable blunders. Without spoiling too much, the film fails to close a few HUGE loops that inevitably call into question the movie's credibility. But like any true art-form, over-analysis causes you to miss the superficial beauty of the work. Boyle does an amazing job of helping the audience to trust their senses instead of their brains. Consequently, Trance begins with an uncontrollable amount of energy and finishes with an unparalleled amount of poetic beauty.

At the end of the day, Danny Boyle's Trance is a messy and complicated film that delivers in look, sound and feel. This little gem is a puzzle that's meant to be pieced together for you. If you're in the audience and trying to play "the detective", you're missing the punchline. Trance is the type of feature that you experience and savor. Let Boyle do the work for you, and you'll easily appreciate the film for the twists and unique style that pour out of the screen. With one of my favorite finales in recent memory, Trance is a fun and energetic thrill ride. One definitely worth checking out.