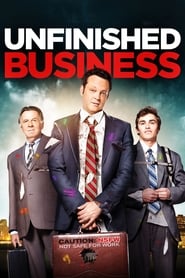 Vince Vaughn broke out onto the scene in Doug Liman's 1996 indie comedy, Swingers. Nearly 20 years later and the tall and imposing funny man is still taking front and center roles on an annual basis. However, it's been a dozen years since the smash hit Old School debuted and even a decade since Wedding Crashers took the world by storm, so clearly Vaughn's quality of work has been watered down over time. But for as much flack as he receives for falling off the proverbial cliff in his most recent endeavors, I've always believed that contemporary films like Delivery Man, The Internship and The Watch are far more mediocre than unbearable. And in his latest comedic effort, Unfinished Business, we're given a comparable level of Vaughn that we've grown accustomed to over the years.

Dan Trunkman (Vaughn) works his tail off for a large company traveling all over the place and missing out on his family's lives. So when he's asked to take a 5% pay-cut in salary after delivering an extremely profitable year, Dan channels his inner Jerry Maguire and decides to start up his own company and compete against the big boys. And to make matters worse, the only two men he manages to recruit for the team are an aging old-timer (Tom Wilkinson) and an intellectually lacking newbie named Mike Pancake (Dave Franco).

There are plenty of hits and misses sprinkled all throughout the raunchy and riotous comedy, Unfinished Business. One of the most notable deficiencies looms over the film's dramatic story centering around the main character's family life. Issues surrounding bullying feel extremely out of place and forced into the script, almost to the point of being distractedly bad. Furthermore, Unfinished Business tries to amp up its R-rating with tasteless humor surrounding female and male nudity that violently screams lazy writing. The feature possesses a bit of an identity crisis as it struggles to differentiate itself between a vulgar road-trip comedy and an endearing family film. Failing to fully commit one way or the other, Unfinished Business ultimately loses itself and the audience in the process, proving to be yet another run of the mill comedy in Vince Vaughn's lengthy filmography.

Despite my less than rewarding remarks regarding director Ken Scott's latest film, Unfinished Business is by no means a dreadful viewing experience. While the general story is unimaginative and the tone is unbalanced, a collection of quirky and off-kilter characters help ease the audience through a brisk 91-minute running time. The most memorable performance comes from the rising star, Dave Franco, who's downright hilarious as the "special" member of the trio. Tom Wilkinson is no slouch either, as a miserable old man desperate to let loose on their European adventure. And finally, an exceptional turn from the always wonderful Nick Frost, in a brief but effective role, all but reaffirms the strengths of the film's supporting characters.

Unfinished Business is a typical early year release that's easy to sit through, but just as easy to forget. There's no harm in this wacky comedy, but there aren't many perks either. If you want to indulge in some thoughtless humor for an hour and a half, here's your chance. Just make sure that you expect a quality of film comparable to many of Vince Vaughn's other recent works.