Review | We Need to Talk About Kevin
Search 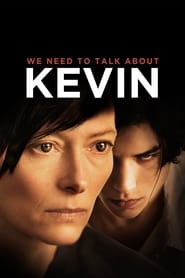 Ironically, since its debut at the Cannes Festival in France, We Need to Talk About Kevin has been the film everyone's talking about. In retrospect, director Lynne Ramsay's 9 year hiatus seems perfectly calculated, much like the actions of the movie's title character Kevin. The film, which is based on a 2003 novel of the same name, has officially been in the works since 2005. Sometimes, good things are worth the wait.

We Need to Talk About Kevin follows Eva (played by Swinton), the mother of a teenage boy who executes a brutal massacre at his high school. From a very early age, Eva senses something distinctly off with her first born child Kevin (played by Miller). As the years pass, Kevin's actions become more and more destructive. Eva tries to confide in her husband Franklin (played by Reilly), yet he wants no part of it. "He's a sweet boy" replies Franklin. Therefore, from the moment Kevin orchestrates a killing spree at his school, Eva spends her life bearing responsibility for the tragedy. She lives with the guilt of knowing she never did enough to stop the ordeal from happening.

Academy Award winner Tilda Swinton leads a phenomenal cast in one of 2011's most explosive films. The actress is spot on in her role as an emotionally drained mother coping with a tremendous amount of grief and regret. The beauty behind We Need to Talk About Kevin rests in the psychology of its lead character Eva. As Swinton demonstrates perfectly, Eva's guilt stems from two different places. First, she feels responsible for not stopping the monster she has known existed since Kevin was a child. Also, Eva sees far too much of herself in her son. All of her darkest qualities are brought out by Kevin and, as a result, she welcomes the abuse delivered by her community after the tragic events transpire. Such a brutally honest portrayal should land Swinton a Best Actress nod at the Oscars, anything less is unwarranted. In addition to Swinton, Ezra Miller gives a fantastic performance as Kevin. Miller is remarkable in his role as a cold and cynical teenager. He takes command of every scene and it culminates in a spine chilling experience. We Need to Talk About Kevin succeeds, in large part, because of its amazing cast.

Lynne Ramsay does a spectacular job of masterminding an intense psychological thriller. The film creates an obsession for the audience, a desperate desire to know why Kevin has done what he's done. All of this intrigue makes for a thought provoking movie experience. In a clever fashion, Ramsay gives enough scattered pieces of the puzzle to allow the viewer to put it all together. We Need to Talk About Kevin is wonderfully crafted and brilliantly executed. Therefore, it's hands down one of the best films of the year.

As always, there will be a few naysayers and skeptics. Many will argue that the actions exemplified in Kevin's early years are unrealistic and unbelievable. The young boy illustrates a stunning amount of understanding throughout his childhood. To me, however, this only strengthens the story and solidifies its authenticity. You should never take for granted the intelligence of children. And although the film progresses slowly, We Need to Talk About Kevin constantly builds in intensity and you'll never want to peel your eyes from the screen.

Not due for a wide release in the United States until the end of January, We Need to Talk About Kevin can be seen in Los Angeles and New York City this week only. But once the film hits theatres all across the nation, it's a must see. And even though the movie revolves around a high school massacre, much of the violence is left to the imagination. Therefore, no excuse is good enough to miss this film.