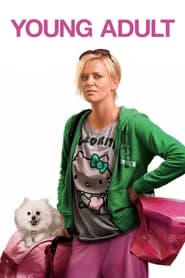 Although Jason Reitman is just a pup, the talented young director has begun his career in a remarkable fashion. He may only have 3 major releases under his belt, but the director has already received two Best Director nominations from the Academy Awards. Needless to say, the anticipation for Reitman's latest work, Young Adult, has been astronomical. In the film, the director matches his talents with the always wonderful Charlize Theron. But the question still remains, can these two stars live up to expectations?

Young Adult follows a struggling fiction writer named Mavis Gary (played by Theron). The recently divorced ex-prom queen returns to her small town home in Minnesota with aspirations of winning back Buddy Slade, her high school sweetheart. No matter how much her new drinking buddy Matt Freehauf (played by Oswalt) tries to coax her out of the bad idea, Mavis believes that she can convince Buddy to leave his wife and newborn child.

With Young Adult, Reitman offers an overly cynical comedy that will ultimately result in a polarizing piece of work. Many viewers will cringe at the idea of such an unlikable lead character. And since the film is a comedy, Mavis Gary's despicable persona is extremely animated. Furthermore, without spoiling the movie's resolve, audiences will find themselves split over the director's choice of action. Hence, Young Adult is a difficult film to dissect.

Despite its polarizing characteristics, Young Adult delivers excellent performances by its main cast. For starters, Charlize Theron returns in award winning fashion. Her ability to portray a washed up and delusional middle aged woman is phenomenal. Mavis is a character meant to make the audience shake its head in disbelief, and Theron certainly succeeds in doing so. Just as effective as Theron is her supporting co-star Patton Oswalt. Mostly known for his work on the television show The King of Queens, Oswalt's performance is sure to place him on the map. In fact, in a year where the Best Supporting Actor category is flooded with options, Oswalt's work still manages to stand out.

Furthermore, Reitman's Young Adult is almost an "evil twin" to his earlier praised work, Juno. The two films are equally sarcastic and equally hilarious. The only major difference between the movies are how their leading female characters are portrayed. In Juno, the pregnant teen which the film centers around is likable and, therefore, it's easy to feel sympathetic towards her. On the other hand, Mavis Gary's constant lack of good judgment and her despicable actions make it difficult for the audience to empathize with the character. Otherwise, I find Reitman's two pictures to be quite comparable in tone.

Personally, I really enjoyed Young Adult. The film is a brutally honest depiction of how certain people are unable to let go of their pasts. To Young Adult's advantage, Reitman does a fantastic job of balancing the comedic aspects of the film with the more dramatic moments. If you're able to keep an open mind about such an unlikable lead character, then it's worth checking out Young Adult.