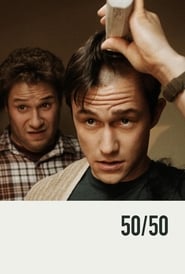 Seth Rogen is no stranger to the "close friend of someone with cancer" role, just recall his 2009 film Funny People where he was opposite of Adam Sandler. While on the set of HBO's Da Ali G Show, when Seth Rogen found out his friend Will Reiser had been diagnosed with cancer, he insisted that Will write a script. Lucky for all of us Reiser complied and developed 50/50, the film loosely based on his own life experiences.

50/50 tells the story of Adam (played by Gordon-Levitt), a 27 year old who is caught off guard when his doctor tells him he has cancer. Adam researches the rare form that he's been diagnosed with and discovers its survival rate is 50/50. He breaks the news to his girlfriend (played by Bryce Dallas Howard), his best friend Kyle (played by Rogen), and his mother, all of which react very differently to the unwanted surprise. With the help of his hospital appointed therapist (played by Kendrick), we watch Adam come to grips with the severity of his illness and learn how to cope with this harsh reality.

50/50 is a success as both a comedy and a drama. Director Jonathan Levine finds the perfect balance between the opposing extremes, and it culminates in a very natural and authentic film. The movie is powered by the strong performances of all of its lead characters. This is the best I've ever seen the film's star Joseph Gordon-Levitt and his onscreen best friend Seth Rogen. The two have an unmatchable chemistry that deeply resonates with the audience. It was a perfect job of casting.

In addition to the film's superb acting, 50/50 is a well paced and delivers laugh out loud comedy throughout the entire film. Seth Rogen is certainly on point as his character never misses with any joke. I haven't seen a dominating comedic performance like that in years. Rogen was so unforgettable that he deserves to be recognized during the awards season. Even though the film is downright hilarious, the comedic portions never seem to take away from the deep, dramatic feel intended for this type of subject matter. Joseph Gordon-Levitt anchors every intense scene and he's extremely believable in the role. The film is well rounded and highly entertaining to say the least.

50/50 is the best movie I've seen so far this year and an absolute must see. All of its characters are properly developed and spot on in their deliveries. This is a wonderful job all around, from the writer Will Reiser, to the entire cast, all the way to the director Jonathan Levine. The film is sure to evoke numerous emotions from the audience, and you'll even catch yourself laughing hysterically throughout the ordeal. 50/50 is a remarkable dramedy that will stand the test of time.