Review | A Most Violent Year
Search 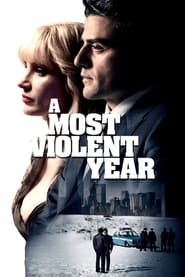 After debuting to rave reviews at the AFI Festival in early November, it's taken nearly three months for director J.C. Chandor's crime-drama, A Most Violent Year, to reach theaters nationwide. Similar to the marketing strategy implemented for Clint Eastwood's American Sniper, pushing the limits to qualify for the Oscars was believed to improve the film's chances at the prestigious awards show. However, unlike Eastwood's Best Picture nominee, A Most Violent Year suffered a very different fate and failed to secure a single nomination. I suppose good things don't always come to those who wait.

Inside Llewyn Davis star Oscar Issac takes center stage as Abel Morales, an ambitious immigrant business owner trying to balance his efforts in building an oil empire with the recent string of thug-like antics imposed by his competitors. Rather than taking action through his wife's (Jessica Chastain) mob connections, Abel chooses the high road and sits idly by as his truck drivers are beaten and his oil is stolen during the heat of New York City's most violent year on record in 1981. And to make matters worse, Abel also feels the mounting pressure of a police investigation and impending charges all while trying to obtain the "American Dream" in as honest a way as possible.

Strangely enough, the most impressive aspect of A Most Violent Year has very little to do with what actually transpires on screen and everything to do with its widely-talented director, J.C. Chandor. The auteur has delivered three feature films to date, all of which tackle very different themes and tones. Although I wouldn't classify any of his works as a "masterpiece", each entry stands strongly on its own and reaffirms Chandor's place as a versatile screenwriter and a talented director. Standout performances from Oscar Isaac - who channels his inner Michael Corleone - and Jessica Chastain, in a gritty mob daughter's role, are what essentially salvage this oddly paced and anti-climactic film. A Most Violent Year is shot exceptionally well and Chandor does an admirable job transporting the viewer into a perfectly constructed early 80s throwback setting. However, this character-driven feature fails to amount to much else.

For all of its wonderful performances and fine direction, A Most Violent Year is far too mediocre from a screenplay standpoint. Chandor's script helps to mold deep and honest characters that are brought to life brilliantly by Isaac and Chastain, yet the painfully slow tension builds to a resolution that packs little to no punch at all. In the final moments we're given a break from tradition by the lead character, Abel Morales, but nothing monumental is shown to adequately support his hasty transformation, which is just one of the many blemishes to Chandor's latest screenplay.

With a title that's as misplaced as Friday the 13th: The Final Chapter (which was only the 4th of about a dozen installments to the franchise), there's only a minimal amount of action and violence displayed throughout the feature. Therefore, you shouldn't venture to the theater expecting a gangster movie gore-fest. Instead, A Most Violent Year is a character-centric and timid tale of morality and corruption in the quest for success.