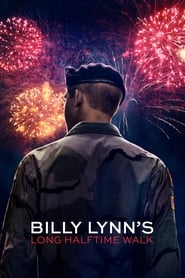 A lot can change in the matter of a few months. Prior to its October premiere at the New York Film Festival, many penciled-in Ang Lee's new adapted feature, Billy Lynn's Long Halftime Walk, as a viable Best Picture candidate. Lee's well-documented success with the Academy, mixed together with a war-time drama, the film checked-off all the necessary boxes. Yet, now, having watched Billy Lynn for myself, Lee's latest work is far from the Oscar-player we all expected and, sadly, it's one of the year's most disappointing entries.

This non-chronological adaption follows its title character (Joe Alwyn) and the other members of his Bravo squad who are home from Iraq on a victory tour. And as Billy prepares to be honored during the halftime show of an NFL football game for one of the worst days of his life. he recalls the harrowing events of the battle and contemplates his future as a soldier altogether.

Billy Lynn's Long Halftime Walk stands as a rare fatally flawed endeavor from Ang Lee. Boasting a muddled screenplay, subpar performances and questionable direction, something of which I was utterly shocked to witness, it's difficult to pinpoint a single redeeming quality from the film. portrayal of Lynn's squad is over-exaggerated beyond belief. Having known many soldiers who experienced the horrors of the Iraq war, most had a smooth re-integration back into everyday life. In addition to under-developed and cartoon-ish characters, the entire ensemble contributes to insufficient dramatics. Billy Lynn falls terribly short of the powerful and moving story Ang Lee intended to tell. With a long list of intriguing options arriving in theaters every week, Billy Lynn is a film you should simply avoid.