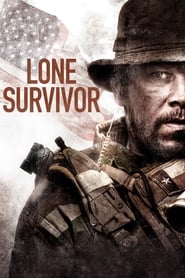 Imagine this ... you're walking down a dark and desolate road when you're approached by a stranger wielding a gun. How would you feel? Scared? Uncomfortable? Just the sight of such a deadly weapon would make almost anyone feel these types of emotions. Now, imagine the amount of fear our brave young soldiers must feel on a daily basis serving overseas in dangerous countries like Afghanistan, fighting against armed militants who don't abide by the typical rules of war. Peter Berg's Lone Survivoris for them. The strong men and women who protect our right to kiss our family goodnight and sleep safely in our beds. Perhaps no film has ever made me feel as proud and thankful for each and every member of our armed services. You are all heroes.

Lone Survivor tells the remarkable true story of a botched 2005 mission where four brave members of SEAL Team 10 found themselves under siege by an army of Taliban soldiers. Thankfully, someone lived to recount their harrowing tale of heroism and brotherhood. One that cuts right through the skin and penetrates straight to the center of your heart, where it belongs.

This isn't Peter Berg's first go-around with a middle east centered war film. The director already has 2007's solid effort, The Kingdom, nestled away in his back pocket. However, his newest release, Lone Survivor, reaches insurmountable heights with an inarguably strong showing from its action-loving director and a relentless true story that goes far beyond anything you'd ever imagine. In a packed afternoon showing you couldn't even hear the person next to you breathing, because chances are they weren't. The feature's intensity is numbing, almost paralytic. You don't just watch these four soldiers combat against an army of dedicated religious fanatics, you experience it. Berg puts you in the center of the action, so much so that you feel every cut and you suffer with every gunshot wound. It's mesmerizing and something you can only understand by witnessing first-hand.

Another impressive quality to the film is how expansive the story actually becomes. The most interesting facets of this real-life account exceed beyond what you'll find in any trailer. There are moments of compassion and sympathy that play out in such a beautiful and earnest sequence. In addition to an exquisite story, Lone Survivor benefits from gutsy and respectful performances from all of its four main stars, Mark Wahlberg, Ben Foster, Taylor Kitsch and Emile Hirsch. Without question, there's pressure to taking on roles that hold as much important as these ones do. The entire cast does a dignified job of bringing them to life, and perhaps no one is better than the regularly overlooked Ben Foster. He's just marvelous, and I'll leave it at that. There's plenty to appreciate across the board, making Lone Survivor my new top film of 2013.

Okay, I'll finally stop with the outpouring of love and quickly address one of the few shortcomings surrounding the feature. For example, its title ... completely unnecessary! My guess is most people are unaware of the story's details going into a viewing, so why give away the ending right off the bat? There are some moments in the third act where Berg attempts to build some tension and anxiety, but they're weakened by a predisposed knowledge garnered from the film's title. Yet, we can easily look past this error in judgment and its effects on the progression of the movie to appreciate Lone Survivor for what it truly is, one of the most gripping and worthwhile true stories you'll ever encounter.