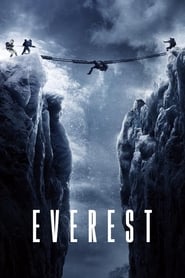 The latest survival tale to hit theaters, Everest, brings the dangers of mountain-climbing to light. Director Baltasar Kormakur examines the unsettling true story surrounding a group of climbers attempting to conquer Mount Everest who run into a blistering snowstorm during their descent. And while Everest paints itself as a suspenseful must-see movie experience, it's actually a drama-heavy retelling of this harrowing ordeal.

Back in 1996, dangerous expeditions up Mount Everest were commercialized by a select few who were willing to lead these operations. Expensive financially and extremely taxing on the body, clients would do anything to scale the Earth's highest point. However, as Everest shows, nothing can prepare you for the worst.

Backed by a talented cast including Jake Gyllenhaal, Jason Clarke, Josh Brolin and John Hawkes, the film adequately holds your attention as it reveals the ins and outs of preparing for a journey up the mountain. Throughout this lengthy mid-section the characters are examined closely and a formidable bond is formed between them and the audience. Therefore, as the dangers begin to unfold, Everest becomes highly engaging and surprisingly gripping. But despite a strong pacing to the film, no area in particular stands out as exceptional, leaving Everest as an above-average selection that falls short of something special.