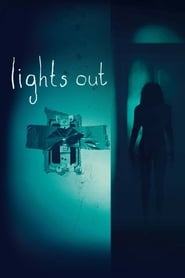 As a lifelong horror fan, I was extremely excited for my advanced screening of the cleverly concocted new entry, Lights Out. Director David F. Sandberg's innovative horror premise began as a short film in 2013 that sparked enough interest to get the major motion picture treatment. Although Lights Out left me slightly disappointed, due in large part to my elevated expectations, the film still stands as a decent scary movie that ratchets up the tension with a masterful level of creativity.

Rebecca (Theresa Palmer) is a young and independent woman living on her own. But when she learns that her little brother is experiencing the same traumatic events she encountered as a child, the siblings seek to discover the secrets behind a dark entity that lives in the shadows of their mother's (Maria Bello) home.

Lights Out uses visual effects to perfection with its dark and creepy villainous character, Diana. However, between all the suspenseful shrieking moments of terror that occur once the lights fade, the film is riddled with sub-par acting and ineffective characters. Instead of rallying for a protagonist that earns a deep-rooted connection with the viewer, Lights Out merely offers solid scares and a respectful 81-minute running time that keeps its pacing adequate. Normally I'm very critical of Maria Bello and have accused her of serious over-acting in the past. Yet, she provides a valuable role that enhances authenticity to the film's otherwise pedestrian story. Lights Out comes with its deficiencies, but Sandberg's big screen debut accomplishes the first goal of any horror film release, to scare the audience.