Review | Dawn of the Planet of the Apes
Search 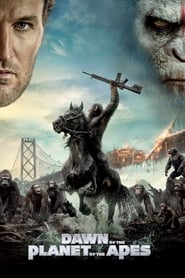 Following a well-received origin story that turned into a worldwide box office smash grossing just shy of $500 million, it was a no-brainer to expect a sequel to 2011's Rise of the Planet of the Apes. Yet, rather than immediately churning out a rushed and thoughtless continuation, the studio handled things perfectly by assembling a whole new team and taking the necessary time to get the project done right. Consequently, director Matt Reeves' Dawn of the Planet of the Apes stands tall as one of the summer blockbuster season's finest films.

A decade after a deadly virus first spread and super intelligent apes escaped into the forest, the human population has become scarce and their ability to survive hinges on a broken down dam miles from civilization. A team of explorers venture deep into the barren wilderness and stumble upon hordes of advanced chimps lead by Casear. Malcolm (Jason Clarke) explains their desperation and Caesar gives the humans permission to occupy the land and fix up the dam. However, co-existence between apes and humans becomes more difficult than either species could have ever imagined.

Similar to its predecessor, Dawn of the Planet of the Apes decides to hook its viewers by establishing an instant connection with Caesar and the rest of the primate colony. Yet, director Matt Reeves and his team of writers deserve an abundance of credit for their exemplary job at building a bond from the film's opening sequence. From there a cleverly constructed story combining subplots of greed, jealousy and revenge take the wheel and steer the film to an action-packed and equally dramatic finale. Supported by sound performances from rising star Jason Clarke and amazing CGI work based on the movements and expressions of the under-appreciated artist Andy Serkis, Dawn of the Planet of the Apes swings past the first film and represents a class of its own.

Despite my affection for the latest installment to the storied franchise of films, there were a few concerning aspects. One such area is the long-winded and action obsessed third act that I usually find troubling during the blockbuster season. However, a brilliant foundation and captivating story helps to soften the blows. Furthermore, images of apes wielding machine guns and riding on horseback to a brutal ambush seemed a little overboard to me. But once again, I felt compelled to overlook these minor annoyances thanks to a fundamentally strong creation from Matt Reeves and his team.

Although I felt as though Dawn of the Planet of the Apes begins wonderfully and slowly weakens throughout, the end result was still a fine piece of work that transcends the prototypical summer blockbuster. Don't be fooled into believing that the feature is a revolutionary masterpiece, but find solace in accepting the film for what it is ... an entertaining and well-executed final product. I enjoyed the story, found the acting to be believable and embraced the ride.