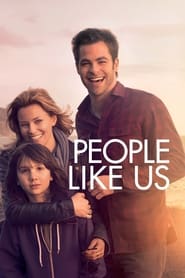 Alex Kurtzman has made a name for himself in the entertainment industry as both a writer and producer. As a credited producer on films such as The Proposal and Eagle, Kurtzman's biggest achievement came in 2009 when he landed a Best Adapted Screenplay nomination by the Writers Guild of America for his work on Star Trek. Now, no one can ever discount the hard work involved with writing and producing, but there's clearly a much larger sense of ownership that goes into directing a film. And with the release of his directorial debut People Like Us, Kurtzman can finally know the feeling.

People like Us follows a struggling salesman named Sam (played by Pine) who, upon discovering his father's death, reluctantly returns to his childhood home in California. Sam then meets with his father's attorney and is handed an old shaving kit containing $150,000 cash and a note asking him to deliver the money to a complete stranger. Sam soon discovers that his father's fortune is intended for Frankie (played by Banks), an estranged half sister that he never knew existed.

Alex Kurtzman's People Like Us is a highly sentimental drama that resonates favorably with the audience. Mostly supported by its leading stars Chris Pine and Elizabeth Banks, this rather bland story benefits from the strong performances given by its entire cast. Although I am no overwhelming fan of Banks, she is absolutely at the top of her game and more than serviceable in her role as Frankie, a down on her luck single mother. Furthermore, Pine is once again brilliant and his convincing performance serves as a fresh reminder of the actor's ability to carry a movie. In addition to an effective cast, People Like Us also succeeds because of its well written screenplay. Dramatic throughout, the feature's script manages to pepper in witty dialogue to complement its sporadic jokes. In doing so, People Like Us remains entertaining through its entirety, thus, propelling itself past the run of the mill drama and into a much more appreciated realm of film.

On the flip side, People Like Us tries almost too hard to cater to emotions at times and, therefore, gently toes the line between sincere drama and Lifetime Movie of the Week. But despite the occasional over-dramatization, People Like Us ultimately rises above the sappy cliche drama. Another weak aspect of the picture is the unoriginal manner in which the story unfolds. Predictable to a fault, every moviegoer can pick its "been there, done that" chain of events out of a lineup. But thankfully for People Like Us, there's enough charm and fast-paced dialogue to keep this re-hatched story from ruining the experience.

Alex Kurtzman's directorial debut People Like Us outlasts the stereotypical drama and stands out as a fun and engaging tale. While the feature is obviously flawed and somewhat over-sentimental, its fine cast and clever dialogue keep the film interesting. If you're searching for an alternative to the standard "Summer Blockbuster", this is a fine choice. And although I wouldn't urge anyone to immediately rush out to theatres to see People Like Us, the movie can be enjoyed by all types of moviegoers.