Review | The Kings of Summer
Search 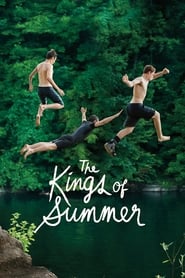 Serving as the most notable platform for independent film, the Sundance Film Festival's contributions toward improving the industry go far beyond the recognition that it receives. In 2012, audiences were graced with one of the finest crop of Sundance selections in recent memory. Titles such as The Sessions (formerly The Surrogate), Safety Not Guaranteed and the Academy Award Best Picture Nominee The Beasts of the Southern Wild (love it or hate it) headlined an unforgettable class of films. However, the 2013 festival lineup appears to be another exceptional collection of independent movies. Perhaps none are finer than Jordan Vogt-Roberts' The Kings of Summer (originally titled Toy's House).

Joe Toy (played by Nick Robinson) is a typical teenager who's growing increasingly irritated by his single father (played by Nick Offerman). Joe's best friend Patrick Keenen (played by Gabriel Basso) also can't take his overwhelming parents. The duo, along with an oddball teenage wildcard named Biaggio, decide to run away from home and build their own house hidden deep inside the woods. Free at last, the trio of friends experience the most important summer of their lives.

Shockingly original and insanely hilarious, The Kings of Summer is a rare R-Rated coming-of-age gem that stands up against classics such as The Sandlot and Stand By Me. As with any accomplished film of its type, The Kings of Summer succeeds on the the shoulders of its trio of young actors. Starring as the recluse Biaggio is Moises Arias, a budding talent who has already mastered the art of the delivery. Arias steals the show as the movie's main source of laughs and humor. Each bringing their own unique presence to the big screen, Arias and co-stars Robinson and Basso all give stellar performances. On the other end of the spectrum, the older Parks and Recreation star Nick Offerman dishes out a healthy dose of clever one-liners himself. With no shortage of laugh-out-loud scenes, The Kings of Summer makes for nothing less than an entertaining and enjoyable movie experience.

Clearly a comedic standout, The Kings of Summer offers less in terms of story and substance. While the writing does a fine job of generating an enormous amount of laughter, there isn't much depth below its paper-thin jokes. As a result, nothing ever legitimately feels "at stake" for the characters, leaving The Kings of Summer as a one-dimensional affair. However, to the film's credit, director Jordan Vogt-Roberts never tries to mold the feature into something it isn't. He openly embraces the comedy genre and even circles the more dramatic moments with a lighthearted tone. By sticking to the blueprint, The Kings of Summer thrives as a satisfying and delightful comedic effort.

Backed by a somewhat surprising R rating (for a fair amount of adult language and teenage drinking), make no mistake about it, The Kings of Summer is an adolescent tale perfectly suitable for an adult audience. With very limited resources, many independent films fall through the cracks and become vastly under-seen and under-appreciated pieces of work. Hopefully The Kings of Summer avoids such an unwarranted demise as it was a refreshing indie teen comedy.