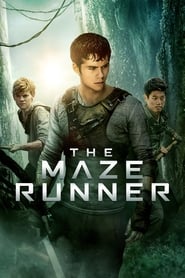 You can run, but you can't hide. The young adult novel craze has taken over mainstream film and, after staring far over the horizon, it's clear to see that there's no ending in sight. The latest adapted film from the genre, Wes Ball's The Maze Runner, serves as an unfortunate example of just how deeply entrenched our culture is in this teenage-driven phenomenon. In a dog-eat-dog world it's shocking to see just how open these money-hoarding studios are to forking over the funds to develop a blockbuster franchise such as this. Well, I guess money really does talk.

After Thomas (played by Dylan O'Brien) awakes with a severe case of memory-loss only to discover a trapped community of boys facing the same set of circumstances, he begins learn about their developed society where an ever-changing maze appears to be the only hope of escape. However, spider-like creatures known as Grievers terrorize the maze throughout the nighttime where no one has ever lived to tell about an encounter. Therefore, a brave and courageous Thomas goes against the rules of the society in order to search the maze for answers and free themselves from this mysterious set of circumstances.

With a Lost-like approach more inclined to create questions than answering them, The Maze Runner attempts to entertain solely on intrigue and action alone. Utilizing a large cast of characters, each of which has no useful backstory due to a weakly supported memory-loss premise, debut director Wes Ball demonstrates no desire to establish an emotional connection with the audience. Rather, nearly two hours are spent focusing on thrilling chase sequences throughout the maze where nothing helps progress the story forward. All of which lead to a less-than revelatory finale that paves the way for multiple sequels to this newly established franchise.

Despite the feature's fundamentally flawed agenda of sacrificing content and story for suspense and visuals, The Maze Runner has many edge-of-your-seat moments. The up-tempo sequences inevitably make for entertaining viewing experiences until they begin to run their course. Eventually, the intensity loses its spark and a flimsy storyline emerges from the background destroying everything the film has built to that point, much like the Grievers to the boys' community. After wading through a myriad of action-packed and visually pleasing moments, The Maze Runner is unmasked for what it truly is, a money-printing and substanceless film.

Furthermore, I'd like to take this opportunity to address the family member of young actor Dexter Darden who sat near me during the screening and continually ruined the entire experience for many of the viewing audience. By adding your own soundtrack and dialogue to the film, filled with vulgarities and shrieking screams that were by no means necessary, you alienated a large number of people who will most-likely spread negativity about The Maze Runner. All of Dexter and the rest of the young cast's hard work becomes overshadowed by your inexplicable lack of respect and disregard for proper social behavior. If a grown woman such as yourself is unable to control your own personal actions, much like a toddler, than please refrain from ever leaving the house.