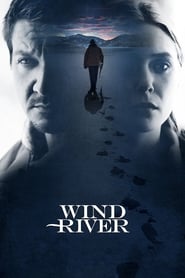 Oscar-nominated screenwriter Taylor Sheridan (Hell or High Water and Sicario) knows a thing or two about crafting a well-oiled story. But nowadays, the hot commodity has his sights set on a larger role as he directs his first feature film since 2011, the Wyoming-set crime thriller Wind River. Sheridan's Cannes and Sundance selected feature takes a little time to get going, but it ultimately plays quite well by the time the credits roll.

Cory Lambert (Jeremy) works as a hunter and tracker for the Department of Game and Fish in the snowy mountains of Wyoming. And when Cory stumbles upon the body of a dead girl on a Native American reservation, he teams with a rookie FBI agent (Elizabeth Olsen) and the reservation's head of police (Graham Greene) to investigate the murder. Together they battle jurisdiction complications and harsh wintry conditions while trying to solve the local crime.

Taylor Sheridan's Wind River struggles through a moping first act that reaches boldly for distractingly ineffective dramatics. Leading pair Jeremy Renner and Elizabeth Olsen also stumble out of the gate, never feeling right for their roles at first glance. But as Sheridan's cohesive story begins to take shape so do their characters, which allows the film to build momentum en route to its sleekly delivered "big reveal". Wind River's mystery comes together through an original and remarkably fluid explanation that reminds us just how talented of a writer Sheridan truly is. And although his direction clearly plays second fiddle to a riveting murder mystery, Wind River improves with every passing minute and closes with an absolute bang, once again solidifying the writer/director's standing in contemporary Hollywood.