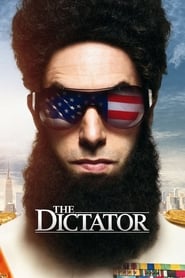 Sacha Baron Cohen thrives on every ounce of controversial attention that he receives. The multi-talented actor, among other things, ingenuously helped re-spawn the mockumentary genre with his 2006 hit Borat. As a spinoff to a character from his HBO television show Da Ali G Show, Cohen constructed one of the funniest satirical comedies in recent memory. After a far less applauded follow up with his 2009 dud Bruno, Cohen and his joint-at-the-hip director, Larry Charles, have teamed up for a third attempt. And this time, they hope to restore their glory with The Dictator.

The Dictator follows Admiral General Aladeen (played by Cohen), the dictator from a North African country called Wadiya, during his travels to the United States. While in the U.S., Aladeen plans to address worldwide rumors that he is developing nuclear weapons. However, during his slumber in a New York City hotel room, Aladeen becomes the target of a ploy and is kidnapped by a U.S. government official. In the midst of his interrogation, the dictator has his signature beard cut off. Therefore, when he escapes from his kidnapper, Aladeen is left alone and unrecognizable while trying to survive in NYC. With the aid of a store clerk named Zoey (played by Faris), Aladeen attempts to restore himself to power.

With The Dictator, director Larry Charles and creator Sacha Baron Cohen once again dive head first into the realm of absurdity. In usual form, the pair continue their pursuit of stirring up controversy and habitual line crossing. Hence, The Dictator provides plenty of "guilty" laughs and cheap thrills that seem all too familiar. Far from the greatness attained by their debut collaboration Borat, the duo's most recent effort falls short of their obvious potential. Incorporating a highly outlandish and barren plot with large amounts of shock value, the film's comedic tone feels all too unimpressive. The Dictator, at its core, is nothing more than rehashed ideas thrown together in a jumbled, nonsensical script. It becomes clearly evident that Cohen cares more about stunning the audience than genuine filmmaking.

Although The Dictator is a far less successful attempt than their 2006 masterpiece Borat, the movie does manage to offer a constant source of laughs. Its cleverness is surely inferior to its predecessor, but the jokes still run rampant and some are undeniably hysterical. To its benefit, the feature succeeds in forcing the audience to laugh at scenes that they know they shouldn't find funny. Much like Borat, this infectious guilt almost becomes addictive and serves as the movie's brightest aspect. Furthermore, the film uses a minimal 83 minute runtime to its advantage. Never feeling abundantly dull or drawn out, Cohen and Charles seemingly recognize their limitations and take the safe approach by keeping the story simple.

As a comedy, The Dictator is a serviceable addition to the genre. On the other hand, as a movie in general, The Dictator lacks any real substance or fortitude. If you're interested in seeing another typical Sacha Baron Cohen film at work, then you'll probably find it amusing. However, level your expectations because The Dictator is far from the groundbreaking effort that Cohen once offered.