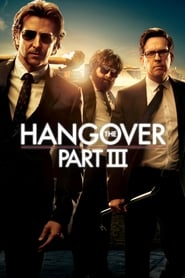 2009 seems like such a short time ago. Yet, almost four years have passed since Todd Phillips' The Hangover helped set the bar for modern day comedies. Then, like clockwork, Phillips and the people at Warner Bros. decided to milk this cash cow for all it's worth. With dollar signs in their eyes, they began a four year plan releasing The Hangover Part II in 2011 and the third installment this weekend. While many may feel that the franchise has run its course, especially after the disappointment of "Part II", the newest inclusion is definitely a step up over its immediate predecessor.

Freshly off his meds, Alan (Galifianakis) has reclaimed his impulsive ways and becomes too much for his friends and family to handle. After agreeing to check into a facility, the Wolfpack ventures to Arizona to help Alan receive the treatment that he needs. However, the trip is quickly derailed when a drug lord named Marshall (played by John Goodman) takes Doug hostage and threatens to kill him in three days unless they bring him Leslie Chow (played by Ken Jeong), who has robbed the kingpin of millions of dollars.

Breaking from the tiresome and formulaic structure of the franchise's first two installments, The Hangover Part III is a fluctuating adventure filled with an abundance of hysterical moments alongside a downtrodden dose of Mr. Chow's character. Clearly an improvement over Phillips' previous visit to the Wolfpack universe, the film dishes out a healthy portion of outrageously hilarious scenes. It's also moderately gratifying to watch the franchise come full circle. Taking a Seinfeld finale approach, The Hangover Part III marks the return for many of the original's memorable characters (thankfully, there's no Mike Tyson). Phillips gives a valiant attempt at wrapping everything up with a nice little bow. However, the post credit clip reminds us that when it comes to a brand that's grossed north of $500 million dollars in box office revenue, the door must be left open for a return. Representing another unfitting and unjustifiable decision from the director.

Although The Hangover Part III has no shortage of laughs, there is plenty to dislike about the Wolfpack's alleged final adventure. It became apparent during the less-than-acceptable sequel that Mr. Chow is a leech, sucking the blood and life out of the entire franchise. Therefore, his inexcusably grand role in this third chapter ultimately deflates the film. Chow receives far more onscreen attention than every other character except Alan. Moreover, much to its detriment, these two oddballs have managed to attract an increasing level of absurdity throughout the course of the trilogy. The beauty behind the original was the collaborative comedic efforts from its trio of stars. Yet, Cooper and Helms, along with an under-utilized cameo by the always phenomenal John Goodman, take a back seat to the shenanigans of Alan and Chow, merely making them props to the story. Consequently, it does the film a huge disservice, leaving plenty to be desired with The Hangover Part III.

If you've poured enough of your hard earned dollars into the first two inclusions of the franchise, then there's nothing lost by avoiding The Hangover Part III in theatres. Despite being a step up from the second installment, the newest effort is still a huge drop off from the timeless magic captured in the original. Hardcore fans will inevitably enjoy the full-circle approach taken by director Todd Phillips, yet there's no valid argument against waiting to catch The Hangover Part III on DVD.