Review | War for the Planet of the Apes
Search 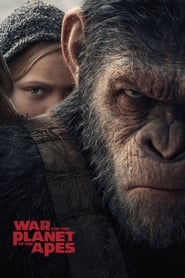 Matt Reeves closes out his third (and perhaps final?) installment of the rejuvenated Planet of the Apes franchise with this weekend's release. And while lofty praises continue to pour in for this latest effort, the film doesn't quite justify its combative title. Instead, Reeves bridges his story arc with the 1968 original film through an ambitious effort that reaches for a more emotional angle than battle-infused centerpiece.

While Caesar (Andy Serkis) and the rest of his advanced ape society reside deep in the wilderness, they suffer a severe number of casualties during ambush attacks from a human army led by "The Colonel" (Woody Harrelson). But as the majority of the ape population wishes to trek beyond the mountains in search of a new land to call home, Caesar and a select few turn their backs on the tribe and seek vengeance on The Colonel. The feuding leaders meet in the midst of a deadly showdown that could determine the fate of humanity.

Matt Reeves' aspiring epic prides itself on themes of family, revenge, sacrifice and morality. And one of the most profound aspects of the film is how Reeves and co-writer Matt Bomback circumvent any sense of repetition with the franchise's last film and continually drive heady, new ideas into this 140-minute tour de force. In doing so, War for the planet of the Apes always provides a clever turning of the page in its story and never falls victim to what could have been a long-winded endeavor. But despite these well-crafted shifts throughout the film, its screenplay does miss the mark with some puzzling new developments, especially those transforming Koba-loyalist apes into traitors who now pledge their allegiances to the humans. Koba was so anti-human and the backbone of the second film's brutal battle between the two ape factions, that it seems completely implausible.

Another interesting development is the lack of full fledged combat in a film that carries a title such as this one. Rather than funneling his attention to a string of action-packed fight scenes, Reeves and company pivot their tale to a more emotional side of Caesar. In some regards this element of the film becomes very preachy, often reminding the viewer via dialogue all along the way as to why Caesar and his small pack are on their mission. Yet, this lofty attempt at the dramatics also serves as a refreshing and much-needed twist to the saga that Reeves captures pretty well. War for the Planet of the Apes isn't exactly the masterpiece some have labeled it to be, but the latest and possibly final chapter in this set of prequels is without a doubt a satisfying one.